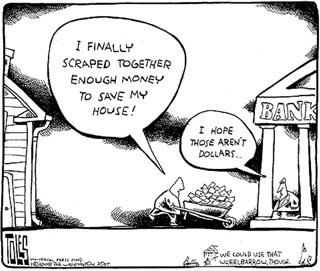 When our family moved to a nice older (platted in 1924) neighborhood on the edge of Waukesha's central / downtown area, we were struck by the desafinado ambiance of a tiny cottage on the lot next door. It was non-conforming as to setbacks, both from the street and from the neighboring (our) lot. It was owned by the family who sold us our new house. I was offered the cottage along with the house we wanted to move into. $56 Thousand. It was touted as having reasonably good tenants and a good rental that would have easily covered PITI with some left over--and the possibility of appreciation.

Landlording always seemed to me a pain in the butt. But there was the possible upside of being able to have some control over who lived that close to my lot line. And, while the cottage was tiny, the lot was normal size with four healthy towering shade trees and a yard that was nicely fenced. I occasionally worried someone who lived there might think it'd be cool to have three Doberman Pinschers and a Pit Bull.

Three owners later, including an unprincipled flipster who introduced himself as a Christian investor.

The foreclosure paperwork published in late summer, 2007 by Abby O'Dess, Esq.--apparently the go-to law firm for dispossessing the foreclosed-upon (If you ever get a letter from the office of Ms. O'Dess and her Associates start packing up), indicated that the bankers had been stiffed to the tune of $112 thousand. At the auction on the courthouse steps on Feb. 4, 2008, the sheriff announced that the lienholder wished the bidding to start at $93 thousand.

Not a peep from the assembled dozens of bottom-feeders.

Today I called the real estate agent who has now been given the property to dispose of.

It is in better shape than it was in 1992. It has a new roof. The twenties era, never-
properly-dismantled septic tank has been dug up and taken away (at considerable cost). It has miraculously morphed into a substantial residence with 953 square ft. of living space, this in spite of the clearly observable fact that the footprint is identical to what it was in 1992 when it was described, listed, appraised and assessed as a cottage with about 840 sq ft. of living space. Perhaps this was the work of the pliant and eager-to-please appraiser who worshiped alongside flippo-man at the altar of greed and mendacity.

But, it has a basement. A basement dug some twenty years after the house was built in 1930. They carried the dirt up the "basement" stairs in buckets, I'm told. It is a basement that has sometimes been full of enough water to let the homeowner paddle a kayak down there.


Did the bank price this shack knowing it would kill them if they have to hold on to it until the housing market begins to recover?