Getting sick of this? I am.

The daily body counts from Huntley and Brinkley in the mid- and late 60s started the pressure on a couple of obtuse and deluded American presidents to rethink land war in Asia in pursuit of the evanescent goal of preventing falling dominoes.

This time it is the equally delusional but exponentially more costly, risky, wrong-headed and fundamentally immoral than the other one.

September 15, 2009, I (we) owe a quarterly income tax payment that is just shy of one thousand dollars.


It will not be paid. We'll mail in the voucher with the words "No War Taxes" written on it, establishing this act as tax refusal rather than tax evasion.

Iraqis are observing a three-day mourning period following the death of Shi’ite Muslim leader Abdul-Aziz al-Hakim, as his body travels through important Shi’ite cities on its way to burial in Najaf. This has not stopped the violence however. At least eight Iraqis were killed and 45 more were injured in the latest attacks.

A string of bombings vexed Baghdad today and in the overnight hours. A pair of sticky bombs wounded 12 civilians in the Adhamiya district. Two policemen and two civilians were wounded during a blast on Beirut Square. Another bomb wounded two policemen and two civilians in New Baghdad. Last night, a bomb in New Baghdad injured three people, including two civilians, while a bomb in Mansour wounded two more. A third bomb, in Ghazaliya, left no casualties but destroyed a U.S. vehicle.

One civilian was killed and six were wounded when a car bomb exploded near a U.S. base in Taji.

In Mosul, three Iraqi soldiers were killed and seven more were wounded during an attack on their checkpoint. A bomb killed a policeman and wounded another. A separate blast killed a civilian and wounded two soldiers. Police detained two men and defused the car bomb they were driving. Two gunmen were arrested as well.

A Kirkuk policeman was killed and another was wounded in a drive-by shooting. A roadside bomb wounded two civilians. MNF forces killed one man and wounded another who were apparently planting a bomb.

The 1920s Revolution Brigades announced they will escalate violence during the Ramadan observance.
Posted by Jim Bouman at 7:04 PM No comments:

In Baghdad, five Iraqis were wounded during a car bombing. Gunmen stormed a jewelry shop on Palestine St. and wounded two people who fought back; one gunman was captured.

In Mosul, a bomb killed two civilians in the Faisaliya neighborhood. Gunmen killed a man on a bus.

A bomb killed a farmer in Buhriz.

A Kirkuk policeman was wounded when a bomb planted on his car exploded.

To plunder, to slaughter, to steal, these things they misname empire;
and where they make a wilderness, they call it peace.
Tacitus
.
Posted by Jim Bouman at 6:09 PM No comments:

The stuff you hear on Sunday morning yap shows...

Paul Krugman says that we'll soon realize that Gross Domestic Product (GDP) is growing. He actually said that on the Sunday TV chat circuit. Not to put too fine a point on it, but I would really like to know what you mean by that Paul....

Do you mean that the Atlanta homebuilders are going to open up a new suburban frontier down in Twiggs County so that commuters can enjoy driving Chrysler Crossfires a hundred and sixty miles a day to new jobs as flash traders in the Peachtree Plaza?Do you mean that the Home Equity Fairy is going to wade into the sea of foreclosure and save twenty million mortgage holders currently sojourning in the fathomless depths with the anglerfish?Do you mean that all the bales of deliquescing, toxic "assets" hidden in the vaults of Citibank, JP Morgan, Bank of America, et al, (not to mention on the books of every pension fund in the USA, and not a few elsewhere) will magically turn into Little Debbie Snack Cakes on Labor Day weekend? Do you mean that American Express and Master Card are about to declare a Jubilee on accounts in default everywhere? Do you mean that General Motors will produce a car that a.) anyone really wants to buy and b.) that the company can sell at a profit?

What's growing in this country besides unemployment, bankruptcy, repossession, liquidation, gun ownership, and suicidal despair? In short, are you out of your mind, Paul Krugman?

Monday: at least 15 Iraqis were killed and 21 were wounded in bus bombings in southern Iraq.

Also, a U.S. family has learned that their soldier son’s death in Iraq may have been triggered by abuse from fellow soldiers. 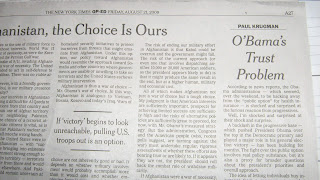 How does The New York Times manage to deliver a headline at the top of the op-ed page in 30 pt. Italic that makes a hash of the name of the President of the United States?

Rethinking my trip to the west of Ireland...

In the past, late August was preparation time for a trip to the ancestral home and relatives in the west of Ireland: County Mayo--Westport and a nearby glaciated drumlin in Clew Bay. The entire 46 acres of Inishgowla, where my grandmother lived until age 16, was once too poor to support four families. Look at it now. This cottage is presently the only structure on the island. For sale at a mere 365,000 Euros, roughly half a million USD.

Who knows the current details of ownership? It certainly isn't anyone in our family.

If there's a mortgage on it, it might be wise for the debtor lay low and work on getting current. It's hard to believe that mortgage payments are up to date on this improbable "luxury" dwelling. Ireland, you see, is in deeper financial/real estate travail than many places closer to home--places like Las Vegas and the California Inland Empire.

(Quick change of venue to the west coast of USA.)

My son lives in half of a nice-enough duplex in Los Angeles--Redondo/Manhattan/Hermosa Beach area--right on the PCH, four blocks from the surf. His landlord is a Dubliner who came to California to make money in the real estate. Currently he is renting the duplex to three recent grads of Univ. Wisconsin--well below his costs. He'd bought the place with flipping in mind. He's an engaging fellow; I hope he gets out of it without getting too badly skinned. I met him last month and he told me this story.

(Back to Ireland and its real estate travail.)

Developers/builders/contractors in Ireland had special challenges in the real estate boom. The Irish typically didn't go in droves into the fields of masonry, carpentry, roofing and plumbing. Those that could went to the University, yearned for intellectual pursuits--teaching and, in the days of the Celtic Tiger, high tech and computer systems design (not to mention mortgage banking). Those inclined to workaday labor had traditionally emigrated to the States or Australia, where good union jobs eventually got them to the 'burbs.

So, the Irish had a building boom and too few craftsmen. Enter: the Czechs and Poles. Free movement within the EU permitted a steady and growing population of skilled craftsmen from eastern Europe to craft the fine real estate that became the standard for newly prosperous Irish.

Then, the crash. Immigrant laborers out of work, subsisting on the dole or headed back to Katowice or Ostrava. In either case, it was doubly difficult because they were typically owed thousands of Euros when the developer went bust.

Enter: friendly debt collection services offered by helpful people they met when they arrived back home without a zloty to their names. These skilled collectors would "buy the paper" from the guy who got stiffed, typically paying one third of the face value. Then they'd go to Ireland and track down the developer who had stiffed their "client".

Then, they'd shoot him in the foot; next guy in the knee, the third one in the shoulder. Can't go much higher without moving from mayhem to homicide. Those first few didn't even get a chance to pay up. Since nobody wanted to be next, the rest found a way to pay up.

"Saints preserve us," as mom might have put it.

Any in-depth reporting would, of necessity, require revealing who really runs this outfit.

Children's Hospital of Wisconsin is prestigious, hugely-funded, much-given-to-self-promotion/
congratulation. It has always been the untouchable part of the health care arrangements in this community.

Nevertheless, when an agency is harpooned, and seems to be quite deserving of that harpooning by outside, objective reviewers, the daily newspaper reporting on the chronic failures ought to be thorough in identifying just exactly who sets the standards for policy, budget, leadership, priorities and accountability.

Children's Service Society is the name of an old line Milwaukee agency that was taken over by Children's Hospital of Wisconsin, though you wouldn't know that from reading what the scribblers of the Journal Sentinel investigative team have to say.

He's gone, but the sound is still with us.
Posted by Jim Bouman at 12:08 PM No comments: