Just a piece of furniture... 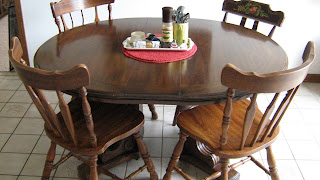 This is, perhaps, an offbeat way to re-enter the blogosphere after an eight week absence, particularly in light of this blog's raison d'etre, that being a focus on water and the politics of Waukesha.

The bride read, from the MJS, an obituary of sorts: Porter's of Racine is absolutely going out of business , finis, no mas, going to close it's doors at the end of business tomorrow.

"...Any reasonable offer will be considered".

Well, thanks for the stuff--and the style--you sold over all those years. And, sorry to see you go.

The photo up top is of a table a young couple bought in 1974, shortly after purchasing a first home, a few blocks from downtown Waukesha.

Thirty six years of family meals around a comfortable, beautiful, just-the-right-size table. First for the two of us (no leaf), later for four (small leaf), occasionally, for six or eight (large leaf).

People told us to go to Porter's for furniture because they had high quality goods. It turned out to be good advice. We agonized over buying something for several hundred dollars, then gave in to the pull 0f something that we thought was beautiful and would last a long time.

A piece of furniture that is still beautiful and useful after 36 years of daily use. It is part of the family. It has seen lots of discussion; a season of adolescent sulking; a few meals that went catastrophically bad; many more meals shared with friends that were emblematic of lifelong and sustaining friendships. And barrels of vino, leading unfailingly to veritas. A certain amount of bullshit and lots of poker and pinochle.

This table is emblematic of the life of a family. It is sturdy, beautiful, enduring, useful. And an outfit called Porter's of Racine sold it to us a long time ago. It will be passed on to a next generation, maybe several generations.

We are grateful that there was a place that sold such things... things that last. It would be better if such an organization could survive in the age of chipboard "furniture". But, the table endures, survives.

May we all endure.


PS. Waterblogged went out-of-commission early in March due to an emergency appendectomy that led to a week of of pseudo-healing and recovery, only to relapse due to "complications," followed by another week of recovery-of-sorts that foundered on further "complications". Three admissions to the hospital in 20 days, each through the ER portal, is the reason WB has had nothing to offer on the hot item of Waukesha's elections and the decision to pursue getting a diversion of Great Lakes water to the City of Waukesha.

Despite the loss of 20 pounds in 25 days (believe me, you do NOT want this to happen to you), Waterblogged will return to the debate, regarding new leadership and new perspectives on how to ensure both Waukesha's viability as a community and its need for a safe and reliable source of water.

Posted by Jim Bouman at 7:26 PM No comments: