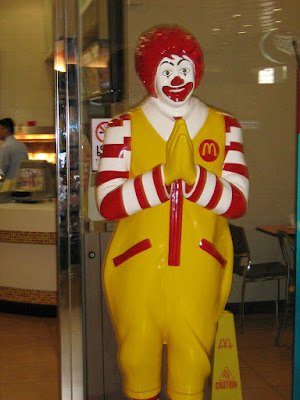 Three weeks in Thailand--visiting with family living there and enjoying a bit of urban exploration mixed with episodes of trekking/eating/swimming/snorkeling/eating/ laying around on the beach/eating--ended this morning with this cold wintry slap in the face.

Bangkok is a city alive and bustling and full of immigrants. Three "Lonely Planet" guidebooks (dated '04, '05 and '06) serially estimated population 7.7 million, then 9 million and finally 10.5 million). The Thai and lots of immigrants all seem to be getting along quite peacefully. As you can see, even the immigrant redhead above has adopted a low-key approach to hustling burgers and fries.

And they have a marvelous, brand new, beautiful, air-conditioned subway. It needs 300,000 riders a day to cover costs, including amortization of construction debt. After three years the ridership is only at 190,000, barely covering operating costs.

What can they do about this horrific financial disaster? Why didn't they get some of the mass transit analysts of Milwaukee instead of "environmental goofs" to advise them against this yawning maw of tax-devouring stupidity?

They are in the process of doing what needs to be done:
1. Expand the existing routes.
2. Add new routes.

It is still a new and relatively small system, a work in progress. The trains were often full when we rode them, indicating that those who had access--that is, lived within a quick walk or cab ride--used it. Those in different regions of the sprawling (you ain't seen sprawl 'til you've seen Bangkok sprawl) city will use it when it arrives in their area. As it expands, every user will have a larger range of options on the list of destinations. That's the way mass transit works. It doesn't pay for itself on day one, or even in decade one.

The planners have done a good job of phasing construction and planning for the considerable capital expenditures. Thai people in Bangkok presently have a semi-functioning transportation system: almost two million motor scooters, thousands and thousands of cabs, Tuk-tuks (three wheeled, noisy, open-air vehicles, less costly than cabs, but useful for someone with a lot of groceries to carry home), buses and private cars.

And they are choking on the air pollution as they sit and wait in traffic.

They are also seeing an astonishing rise in the cost of fuel. Eighteen months ago diesel fuel and gasoline cost 7 Baht per liter; today it is 32 Baht per liter. That is about $4 per gallon when you do the currency exchange--thirty Thai Baht to the dollar.

Thai working people typically put in 11 hours a day and usually work a six- or seven-day week. Typical wages for a maintenance worker or cook is about 4,500 Baht/month; 12,500/month for a skilled office worker.

So there is not a lot of money for transportation. Yet, the Thai economy grows and grows. Political leadership and professional planners know that growth, control of pollution and congestion will be achieved only with good, fast, efficient and inexpensive transportation. (I never waited longer than four minutes for a subway train.

Will somebody please send Mark Belling and Scott Walker over there on a fact-finding mission. If they don't like what they see, maybe they'll take it as an opportunity and decide to stay there to fire up the Thai people (as well as all the refugees they seem to allow in) with some blasts of anti-mass transit rhetorical flame-throwing.
Posted by Jim Bouman at 12:18 PM 1 comment:

IMHO, nobody can quite nail it like Jim Kunstler at CFN. Is there anyone in Milwaukee who could shut him up?

The Iowa caucus set into motion a curious self-reinforcing feedback loop of inspiration -- that an African-American political leader could win an important primary contest in a Wonder Bread state, and that all Americans (especially white Americans) could "feel good" about living in a country where such a thing is possible. This is an understandable sentiment. Whatever else Americans have been conditioned to be lately -- blubbery, debt-crushed, tattoo-etched, Jesus-haunted, multiply-addicted TV zombies -- a residual kernel of fairness seems to persist underneath all that cellulite and avarice....(the rest)

JHK writes a blog article like this one, and posts it every Monday morning. He's been tub-thumping on familiar themes, and his weekly riffs expand his outrageous takes on a familiar topic--the inevitable coming apart of the sub- and ex-urban land o' tract mansions-- when fossil fuels grow really scarce and costly.

Which makes me think about a useful and enlightening community event we ought to cobble together: let's bring Kunstler to town for a debate. A genuine, give-and-take argument of the affirmative and the negative positions on a Well defined topic:

The Crisis in Energy. Can the United States Live with an Insatiable Thirst for More Fossil fuels?

This topic was recently vetted, carefully briefed, and is being weighed as a potential topic for the world of interscholastic/intercollegiate debate in the US for the coming season. The wording of the topic is carefully drawn to permit sufficient ground for both negation and affirmation.

The coming ten months will be full of trash "debates,"--the sort of nonsense talking points and "gotcha" lines that mock the ancient art of argument in American Presidential election years. It will be great entertainment, more dignified (by a hair) than mud-wrestling, and a chance for a fearless and acidic local partisan--whom I now nominate to make the affirmative case--to think on his feet.

Are you up for it, Mr. McIlheran?
Posted by Jim Bouman at 6:57 PM No comments: