The Conway and the Clifton....Home, Sweet Home

A little research today confirmed a suspicion. I have lived about 60% of my years in Sears Kit Homes.
Something about "Kit" doesn't sound solid or long-lasting. But my research yields a fascinating story about how the Sears Roebuck Company, from 1908 through 1945 manufactured (In Cairo, Illinois and several other locations) more than seventy thousand solid, well-designed houses that arrived in one (sometimes two) railroad boxcars with complete blueprints and and an 80 page leather-bound book of instructions on assembly.
For 17 years I lived in The Conway on Madison Street in Waukesha. Twenty years ago I moved into The Clifton on Easy Street in the same city. Both were (are) solidly-built, enduring (one built in 1928, the other in 1931) residences (homes, nests, what else can I call them?) that will last another 80 years--with just a little attention to maintenance.
There's something very appealing about a house that you could buy from a catalog, from a company that offered you a mortgage on that house based on ONE condition: that you had a job.
And--best of all--the goods were delivered quickly, efficiently and cheaply on a Choo-Choo train.
Posted by Jim Bouman at 5:26 PM 2 comments:

The hero of San Juan Hill 'splains it all for you...

I'm so angry with that infernal little Cuban republic that I would like to wipe its people off the face of the earth. All we have wanted of them was that they would behave themselves and be prosperous and happy so that we would not have to interfere. And now, lo and behold, they have started an utterly unjustifiable and pointless revolution.
--President Theodore Roosevelt, 1906

As the second half-century of the Triumph of the Cuban Revolution unfolds, it is worth reviewing how the last ten American Presidents have fared in taming, uplifting and re-directing the Cubans and their pointless revolution.

All (some more than others) have huffed and puffed about giving Castro his walking papers...or an assassins's bullet. Six of them have gone to their graves knowing they failed. Four more have left office knowing they failed. And, the incumbent has been distracted, leaving all things Cuban to his Secretary of State, whose diplomacy has consisted of nothing since the opening gambit: "You change; then, we'll talk".

A recent book is well worth the time and effort demanded by a 700 pager. The title is from TR's genocidal rant. For an overview, the first three chapters are here.

That Infernal little Cuban Republic: The United States and the Cuban Revolution, by Lars Schoultz

This is what they call "tightening up" at HUD/FHA

We are three years deep in the housing debacle. Why are we only just now considering raising the standards for FHA mortgage insurance?

For the next 30 days, HUD is seeking public comment on the following policy changes, each of which are designed to mitigate risk to the Mutual Mortgage Insurance Fund while promoting sustainable homeownership for FHA borrowers:

FICO score of 580 is being promoted as the new and more rigorous ticket to admission, the new gold standard. Insanity for someone to be able to get a mortgage with almost nothing --$7,000 on a starter shack costing $200,000-- down payment with a rotten credit record. And just how rotten is a 580 FICO score. Here's a chart from the Fair Isaac Corporation, the developer of FICO scoring:

And, the second "tightening" indicates how meaningless even the 3.5% is. Through sleight of hand and over appraisal, the seller of a house that is getting FHA insurance for the buyer, can boost the selling price, then make a "contribution" to the amount the buyer has to bring to the closing.

This is crazy stuff , based on "standards" to promote sales of houses and condos that banks would never finance on their own without there being a big deep-pockets co-signer.

The FHA in the past did a pretty good job of underwriting the mortgages they insured. Default rates were managed by not taking risks on people who had no business trying to get loans they were unlikely to pay back.

Didn't we learn that low downpayments are a recipe for disaster? Apparently not. The reason that government programs of FHA will not do more than the miniscule tweaking they are considering is that government is just about the only lender making mortgages.

We are so deep in the hole that we'll never get out.

So, that becomes Reason #3 why the Waukesha Water Utility Scheme to divert Lake Michigan water is toast.

Posted by Jim Bouman at 3:04 AM No comments:

...The Top 5 percent in income earners — those households earning $210,000 or more — account for about one-third of consumer outlays, including spending on goods and services, interest payments on consumer debt and cash gifts, according to an analysis of Federal Reserve data by Moody’s Analytics. That means the purchasing decisions of the rich have an outsize effect on economic data. According to Gallup, spending by upper-income consumers — defined as those earning $90,000 or more — surged to an average of $145 a day in May, up 33 percent from a year earlier.

Then in June, that daily average slid to $119. "I think a lot of that feeling that the worst was over has sort of abated," said Dennis J. Jacobe, Gallup’s chief economist.
....
Sam Pizzigati, associate fellow at the Institute for Policy Studies, a left-leaning research center, cautions against simply boosting the spending power of the rich through tax cuts or other measures. “Otherwise, we find ourselves in an ‘Alice in Wonderland’ world,” he said, “and the solution to the hard times that the economy is going through is to help the people that are not going through hard times.”
Motoko Rich NY Times, 7/19/2010

And now the rich have started tightening their belts.

The nearly $800 billion stimulus package, "cash for clunkers," the credit for new home buyers, the $1.2 trillion in mortgages the Federal Reserve purchased--they're all gone, used-up, finished. Those props that gave glimmers of hope for a turnaround will not be repeated. Because they failed.

The turnaround has made another turn, a U Turn; odds are it is in a very long downward slide. We'll need a conservative, low-cost fix that takes the water we have and fiddles it sufficiently to meet the standard, at a price we can afford. We will not need any extra water; we no longer can afford sprawling growth. The money markets continuing to offer impossibly low interest rates will not last (The Federal Reserve is keeping them so low they can't get any lower), meaning municipal bonds to finance the diversion infrastructure will push the price way beyond the lowball figure of $165 million.

People in Waukesha will be wanting littler houses on smaller lots, older houses they can buy at a reasonable price and fix up, houses in walking distance to schools and shopping. There is a glut of "upscale" (that word makes me gag, always has) houses--tract mansions built of chipboard and vinyl. All of this means that the tax base of Waukesha will continue contracting.

City government, including the Waukesha Water Utility, will need to put itself on a diet. And water diverted from Lake Michigan will be like a big gooey dessert--definitely off the list.
Posted by Jim Bouman at 5:26 PM No comments:

The Waukesha Freeman is a mess. It wasn't always a bad paper. But the last 20 years have been a long slide--from mediocrity, into banality and now unvarnished stupidity.

Home delivery in the afternoon has given way to mailed editions, arriving midday and later to those who want the bargain rate. It's available earlier for half-a-buck in a few newsboxes and on the grocery/pharmacy shelves. Conley Newspapers also publishes the West Bend News. They try to finesse that into economizing on the newshole. Thus, a feature called something like neighboring community news, gets Waukesha readers hot items about the West Bend municipal budget. Few in Waukesha give a rip about how a community fifty miles away spends tax dollars. I'm pretty sure they feed Waukesha "news" to the West Benders to save money in both directions.

Inexperienced reporting staff. Scant indication that anyone in the newsroom has even a shred of institutional memory. Total inattention to simple copy editing. The editorial/opinion page is an abattoir. 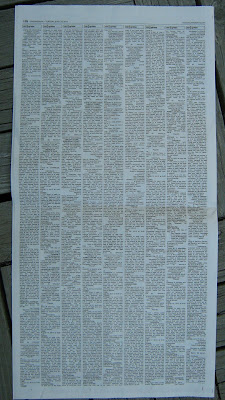 This week the Freeman appeared to hit a record. Nine full pages of advertising, but none of it commercial stuff. All Foreclosures, classified under the heading "Legal Notices". Actually, there was a total of twelve pages of legal notices. Replevin, requests for bids, probate of estates, small claims by hospitals and credit card companies took up three of the 12 pages.

I focused only on the foreclosures and sheriff's sales. It is hard to look at. Behind all the legal lingo, of course, is a mountain of hurt. You find the names of people you know. You gasp at how deep in the hole some are. This week three of the actions involved amounts above a million dollars

This is a look at nine consecutive columns, detailing 17 foreclosures. I didn't cherrypick high numbers; these are just as they were printed, consecutively, over the nine columns. Here are the foreclosure amounts.

Real estate agents try to persuade the hopeful, the gullible, the uninformed that the market is headed back up, that this is the time to get a bargain and ride it up, as real estate recovers, returns to previous valuations.

This much economic slaughter ought to give pause. I'll wager that none of these properties will draw auction bids even remotely close to what the banksters are trying to recover. If the auctions follow recent precedent, most will get no bids.

The only thing headed up is Freeman revenue. There's gold in that agate type.