David Broder. Who will rid us of this unprincipled minion of the beltway elites?

Glen Greenwald in Salon today. (G.G., perhaps the only reason to look at Salon)

"...To justify the absolute immunity he wants for government lawbreakers, Broder describes the Bush era as

One of the darkest chapters of American history, when certain terrorist suspects were whisked off to secret prisons and subjected to waterboarding and other forms of painful coercion in hopes of extracting information about threats to the United States."

"But that's easy to say now that the Bush presidency is over and the evidence of its criminality so undeniable. But Broder never said any such thing while it was all taking place, when it mattered. In fact, he did the opposite: he mocked those who tried to sound the alarm about how radical and "dark" the Bush presidency was and repeatedly defended what Bush officials were doing as perfectly normal, unalarming and well within the bounds of mainstream and legitimate policy.

"More than anything else, Broder's column illustrates the Central Creed of Beltway Culture, which should be memorialized on plaques throughout that city:

When poor and ordinary Americans who commit crimes are prosecuted and imprisoned, that is Justice.

When the same thing is done to Washington elites, that is Ugly Retribution."

Posted by Jim Bouman at 9:44 AM No comments:

It is hard to shake off something as deeply ingrained as a HATRED baked into one's marrow at an early age. Even the nuns at St Colman's Parish school taught us that a healthy Yankee hatred was good for the soul.

I think I've given up pretty much all those old hatreds as I age. Except this one essential hatred. I have maintained, even deepened, my abiding hatred for the Yankees. They deserve nothing less and nothing more.

So, today's 14-run top-of-the-2nd-inning performance by the Tribe, in Yankee Stadium--the new in-your-face Yankee Stadium, that has them so deep in hock they'll never get out of the hole--is too sweet for words.

Go Tribe.
Posted by Jim Bouman at 5:59 PM No comments:

Kelly Peña, “the kid whisperer,” is helping the Walt Disney Company to reassert itself as a cultural force among boys.

ENCINO, Calif. — Kelly Peña, or “the kid whisperer,” as some Hollywood producers call her, was digging through a 12-year-old boy’s dresser drawer here on a recent afternoon. Her undercover mission: to unearth what makes him tick and use the findings to help the Walt Disney Company reassert itself as a cultural force among boys.

Ms. Peña, a Disney researcher with a background in the casino industry, zeroed in on a ratty rock ’n’ roll T-shirt. Black Sabbath?

“Wearing it makes me feel like I’m going to an R-rated movie,” said Dean, a shy redhead whose parents asked that he be identified only by first name.

Ms. Peña and her team of anthropologists have spent 18 months peering inside the heads of incommunicative boys in search of just that kind of psychological nugget. Disney is relying on her insights to create new entertainment for boys 6 to 14, a group that Disney used to own way back in the days of “Davy Crockett” but that has wandered in the age of more girl-friendly Disney fare like “Hannah Montana.”

Click the link to read the rest of this report on anthropology...if you have the stomach for it.
Posted by Jim Bouman at 8:47 AM No comments:

This subdivision is toast... 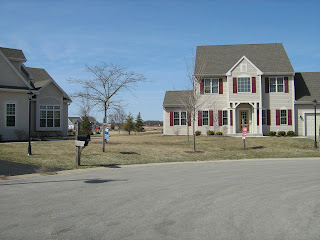 ...a place that advertised itself early on with the arrogantly dismissive boast:
Everything else is just a subdivision

Something new: two houses, side-by-side, sporting "for sale" signs. And there are at least six others among the few that have been built and occupied, in the past three years that are being offered for sale. One of them is a F.S.B.O. 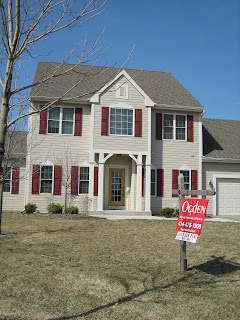 For Sale"...
...Or, you could rent it, if you like.
Agents always tell those who come to look at a vacant property that the previous owner was transferred suddenly to a new job in Charleston or some other unlikely place.
But this is a story I heard first-hand last fall. A guy in a white pickup came to install my new DSL service, here in Waukesha. He said that he was losing his P.F. house to foreclosure, that he and his wife had moved to Pabst Farms in 2006, thinking that they could make out pretty well--as flippers--in the hot market. He went on that his business had gone flat, and that his wife's income had been likewise halved.

They were in default, trying to sell, looking at the inevitability of foreclosure. Now, it is probably bank-owned and "for rent"--that's what it says on the little white part of the sign.
(click tho photo to enlarge)

Listen to Jim Kunstler make a strong case in a conversation with Jebediah Reed of The Infrastructurist, for the need to start with the abandoned/deteriorated rail roadbeds we have, and add to them, to create a great deal more stimulus bang for the stimulus buck.... And for building new rolling stock that isn't necessarily the state-of-the-art level of high tech. Just good intercity rail that will move both people and goods....

JR: So we’re starting a major new round of investment in our national infrastructure. Can we agree that’s a good thing?
JHK: Well, for instance, I think it would be a catastrophic mistake to devote a trillion dollars to fixing up the highways. I mean the days of “happy motoring” in this country truly are behind us. We should be planning for a period when energy resources are much more scarce. Throwing that kind of money at roads is not the way to go about doing this.

How would you be doing it?
I don’t know that I would undertake a spending program like this at all. That said, I’m a pretty strong advocate of repairing the national rail system. It’s obviously not the answer to everything. But it would certainly put a lot of people to work doing something that’s meaningful for society. The infrastructure is out there, waiting to be fixed. I’m pretty adamant that we shouldn’t be going the path of high-tech, maglev, high speed rail at this moment, because we need to prove that we can do this at the Hungarian level before we try to proceed past that.

That doesn’t sound very ambitious.
I perceive one our biggest problems being techno-grandiosity. We are so full of ourselves and so sure that technology is going to rescue us and that we’re so good at it that we can defeat every problem that faces us. It’s a fatal hubris, and it’s subscribed to by an awful lot people who have something to say about the course we take in this country.

In the past, you’ve been critical of Amory Lovins of the Rocky Mountain Institute on similar grounds.
Don’t get me started on Amory Lovins. His basic program for hypercars promotes car dependency. Why do that unless you think we’re going to continue as a car dependent society? That’s why the highway infrastructure thing is so bad, because we’re not going to be able to continue the way we’ve been going. The car is not going to vanish overnight, of course. But it’s certainly going to become a problem as people develop resentments because they can no longer afford to participate in it [as oil prices rise over time].

But you think the answer with rail is to keep it very simple.
Absolutely. The infrastructure is already out there! The track beds are there! And you need an entirely new track corridor for high speed rail, because the high speed trains can’t deal with the curves in the existing tracks. The idea that we would have to create a whole new set of right-of-ways is nuts when we’re not even utilizing what we have. Another thing to keep in mind is that we’re going to be facing a lot of adversity in the years ahead, and we are a culture that will require psychological reassurance. We should have a project that’s achievable. We need to demonstrate to ourselves that we’re still competent.

And the simple version of the national rail buildout would do that.
This rail project is ideal for that purpose. As I’ve said, we’ve got the tracks, and the rolling stock is pretty easy to get. You could argue that GM should be making this stuff. But it’s terribly important that we fortify ourselves psychologically so we have some faith in our ability to face all the other really important challenges that lie in front of us.

A lot of smart people are warning that if we’re going make this kind of enormous national investment, it would be a political disaster for Obama not to have some very tangible things to show for it.
Well, 2009 could turn out to be a politically rocky year. It’s really not clear how things are going play out in terms of the energy picture, the oil picture, and the picture for finance and capital. I’m afraid what’s really going on here is that a huge amount of capital is gone and is never, ever coming back again in any form.

If that’s true it would have been nice to have converted more of it into real and useful things while it was around — like, say, a good national rail network and a better electrical grid.