Jim Kunstler at Clusterfuck Nation (CFN for those still squeamish about the lingo of disaster)...

....as the vacation season winds down, this country greets a new reality. We miscalculated in Western and Central Asia. Russia still "owns" that part of the world. Are we going to extend our current land wars there into the even more distant and landlocked Stan-nations? At some point, as we face financial and military exhaustion, we have to ask ourselves if we can even successfully evacuate our personnel from the far-flung bases in Uzbekistan and Kyrgyzstan.

Russia exerts substantial financial leverage over the US in all the dollars and securitized US debt paper it holds. In effect, Russia can shake the US banking system at will now by threatening to dump its dollar holdings.

The American banking system may not need a shove from Russia to fall on its face. It's effectively dead now, just lurching around zombie-like from one loan "window" to the next pretending to "borrow" capital -- while handing over shreds of its moldy clothing as "collateral" to the Federal Reserve. The entire US, beyond the banks, is becoming a land of the walking dead. Business is dying, home-ownership has become a death dance, whole regions are turning into wastelands of "for sale" signs, empty parking lots, vacant buildings, and dashed hopes. And all this beats a path directly to a failure of collective national imagination. We really don't know what's going on.
Read more 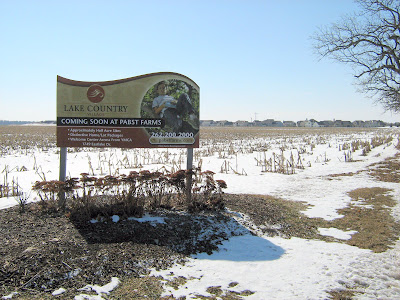 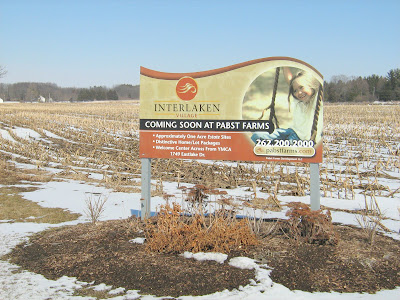 Here's two photos I took in February, '08, showing--predictably--that things were pretty slow out at the development next to the Interstate.

Anyone wise to real estate and development knows that people don't get into the lot-buying and house-building spirit until Spring.

Surely things would be different when the weather turned warm...


So, now that it's warm and getting toward the end of Summer...things are different....These photos below were taken yesterday. 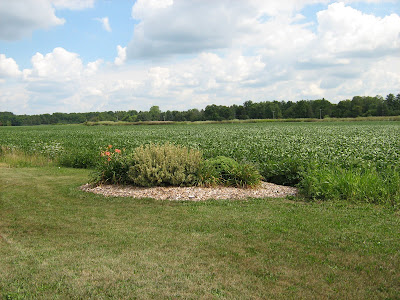 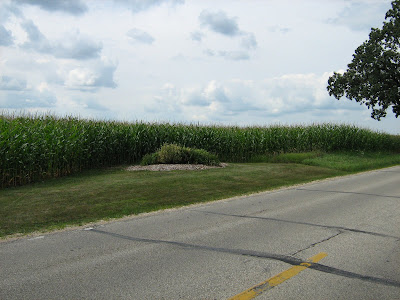 Top, Lake country Village. The other one is Interlaken, taken in the exact same spots as the previous ones. Beautiful sunny late Summer day.

Growth is bursting out all over. It's gonna be a big year at Pabst Farms, a growth year.

My guess? These development pipe dreams have evaporated. Soon the people of Cooney will begin to wonder when the TIF money will be paid back.

Posted by Jim Bouman at 1:58 PM No comments:

Olympics in Beijing....Who gives a rip?.

The first Olympics I remember was staged in Rome, in 1960. I was coming up on my senior year of high school, a complete non-jock, non-fan of any competitive sport, aside from Indians baseball and a little Cleveland Barons Hockey.

The evening news on NBC was 15 minutes, split between Chet Huntley and David Brinkley. There was little to learn about the Rome Olympics, though I do remember a certain amount of awed reporting about a Negro boxer from Louisville, Kentucky, named Cassius Marcellus Clay, coming home with a gold medal. It was good news to America.

Only later would that Olympian lose the adulation of Americans by converting to Islam, getting rid of his "slave name," and throwing away his gold medal. Worse...there followed his uttering the famously prosecutable declaration that he wasn't gonna go to Vietnam.

Why? Because "No Vietcong ever called me nigger".

So, tonight they will walk around the track in the biggest venue of the Beijing Olympiad, wearing patently ridiculous matching outfits (Oooohh, those kyoot hats.) in this great festival of competition and brotherhood, and excellence, and striving, and humble acceptance of the laurels awarded to the victors.

I don't want to know who won, who ran, who stumbled, who got interviewed the most, who was most up-close-and-personal. I don't much care about the agony of defeat (Do they still show that hapless--and probably headless-- skier wiping out on the jump?) nor the thrill of victory.

A whole bunch of Olympic athletes are straight arrow, macrobiotic, drug-free, idealistic, hard-working, monomaniacal strivers. To them, I say good luck, and have a good time.

And, then, there's that whole different bunch of them who are juiced on a variety of steroids...and uppers...and downers...and designer cocktails of performance-enhancers...not to mention Bovine Growth Hormone, (the BGH crowd are clearly the greatest performers, though the recurring problem is getting them to come out of the shade to line up for the start). The Olympics has come to signify nothing so much as the pharmaceutical route to glory and bucks.

Who is juiced? Who is going it alone on sheer will and guts and Wheaties? Who is relying on a little help from his/her friends in the laboratory? Who knows?

I don't want to observe the thrill of victory and the agony of defeat, only to learn later that the race was finally decided only after days and weeks and months and years of comparative/competitive urinalysis.

And maybe I'll be missing something. Something like the maturation of Muhammad Ali, something like the John Carlos/Tommie Smith declaration from the winners' stand that there are some things even more important than bringing home the Gold and the Bronze, and the Green.