I took a self-guided tour of Pabst Farms in Feb/March, around the time of the last snow. This could be a suburban slum-in-the-making.
Pay particular attention to the last twelve (mostly caption-free) shots. This little Towne Centre collection of empty store-fronts is an brutal commentary on suburban sprawl gone wrong. Roll the mouse over and click on the rectangular thingy in the lower left corner for the captions on the photos.

Several months back I posted a piece about Toll Brothers, a big east coast (Horsham, Pennsylvania) builder/developer. They are in the kind of serious financial distress that needs only a few more months of recession to do them in.

The principal reason for their dire straits was reported as partially completed work on developments, combined with options they had purchased on land for ever more development. That is the bane of anyone with big plans for "build out," based on rosy scenarios for the future of a real estate boom.

Locally, the general partners in Oconomowoc (and, presumably, lots of limited partners) committed huge amounts of capital to purchasing the raw land, surveying it, platting it, greasing the slow-turning wheels of government, creating marketing hype, bulldozing, laying sewer and water pipe, paving/curbing, advertising, lining up "preferred" builders, creating synergy through allied development of a hospital, a research park, and a bunch of corporate warehouses, And the real biggie-- snagging an adjacent Harley Davidson dealership. Then they had to cook up their naming schema (shops neatly tucked into a Towne Centre), and the evanescent promise of a regional shopping mall--a destination mall-- with "high end" anchors (we don't need no stinkin' WalMarts, contaminating our Bon Ton-like and Lord and Taylor-ish destinations). And, of course finagling a $25 million interchange on Interstate 94 to funnel customers into their subdivision and mall.

Once a project like Pabst Farms gets rolling, it needs to stay on a pretty quick, well-disciplined pace . If, heaven forfend, the untimely bursting of a real estate bubble intrudes, the general partners are in trouble. And their biggest trouble often comes from the clamoring of all those limited partners who put up much of the capital. These are, typically, country club fat cats, lots of orthopedists and plastic surgeons, professionals who have big incomes and are desperate for a sweet tax dodge. They have--in the usual scenario-- put up lots of money; they expect, in return, their share of the huge (dare we call them inflated?) expenses of the developers, including the marketing hype. When things slow down and there's little operating cash from the sale of lots, the general partners have to scramble, go back to the limited partners for cash infusions.

Pabst Farms is very likely in the unfortunate situation of being stuck right in the middle. They really can't justify continuing to lay sewer and water pipe, pave, plat and market overpriced vacant lots ($110 thousand and up, assessed value) in phase two and phase three. They are still trying to get some return on investment from the sale of the last of the lots in the low-rent, and --frankly, cheesy--Phase One. Meanwhile they,the developers, have to pay real estate taxes on the lots that sit there unsold.

As soon as they switch from corn to platted/ready-to-build-on lots in phase 2 and phase 3, they are out of low-tax farming and into high tax subdivision territory. How high? The taxes one pays on a 1/3 acre lot valued by the assessor at $110,000. Continuing to plant corn on most of the Pabst Farms acreage is nothing more than a weak attempt to hold off a looming day of reckoning.

And all that costly-though-tax-deductible Everything Else Is Just Another Subdivision marketing hype, going back to 2003 and before, is beginning to fade in the sun, just like the signs for Interlaken. That's the name of Phase Three out at The Farms, a phase that looks more like a hallucination than a real possibility.

Q. What is an Economic Stimulus Payment?

A. It is money that the federal government will
send to taxpayers.

Q. Where will the government get this money?

Q. So the government is giving me back my own
money?

A. Only a smidgen.

Q. What is the purpose of this payment?

A. The plan is that you will use the money to
purchase a high-definition TV set, thus
stimulating the economy.

Q. But isn't that stimulating the economy of
China?

Posted by Jim Bouman at 5:06 AM No comments:

No doubt about where you can go if you wanna smoke... 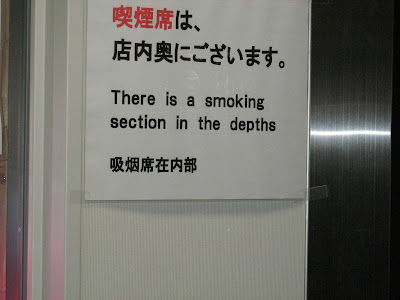 Posted by Jim Bouman at 8:55 AM No comments:

A new president comes into office in eight months . . .

All talk of bitterness and lapel pins will be put aside, in the interest of getting to the ISSUES:

o Airlines--most of them--are in the tank. Airports barely functioning for lack of landing fee revenue.

o Recession that was supposed to end in June has gotten worse in the last 6 months. When the numbers are released at the end of January it will probably be 4 straight down quarters. Unemployment surging with the collapse of retail. Service industry workers hardest hit. Many of the shops (including anchors) in shopping malls are shuttered.

o Detroit on life support. They mostly don't have the cars Americans need. Americans mostly don't have the money to buy anything with four wheels. Nobody can get a loan. Countryside littered with parked SUVs and big honkin' F250s, because the costs of repo are hardly justified by value of the carcass. (Tiny bright spot: bike sales and repair are brisk.)

o The housing/mortgage/banking nexus worsens as hints of the full enormity of the losses in the financial sector continue to dribble out.

o Families doubling and tripling up in suburbia.

o Corn/ethanol bubble is losing air fast. Farmers are back in the hole.

These are the minor problems that will take a back seat to . . .
The Biggies:
o Ending the war in Iraq.

o Universal Health Care.
A new President must do these two things, or the voters will turn against him/her, just as they did against G.W. Bush. Iraq is first on the list.

Closing out the Iraq fiasco will be a nightmare for American troops, nearly as bad as continuing. Look at the detail of a map of Iraq and the Persian Gulf. The only way out is the north/south route, down the narrowing terrain of that cinder of a country, toward the seaport where the tip of Iraq meets the tip of the Persian Gulf. The retreating Americans will either leave behind hundreds of billions in war materiel and equipment, or try to load the stuff on thousands of ships--all trying to maneuver in that bottleneck-within-a-bottleneck, the Straits of Hormuz.

Even with all the training that gets done by the Army, I get a feeling nobody has been practicing the art of orderly retreat. Actually, there's no such thing. Think Dunkirk, or--even worse--Bonaparte's Moscow disappointment.

A retreat, at the beginning of the end of an empire. 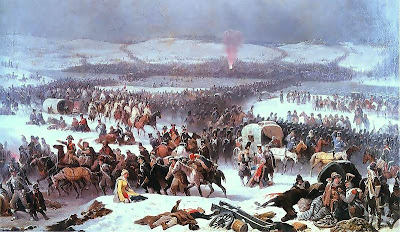 The Grande Armée Crossing the Berezina

Napoleon and a remnant of the Grand Armée trudged west, in retreat, out of Moscow and across Russia and Poland during the winter of 1812-13. Even though his army had been reduced from 422,000 to 150,000 by the time Bonaparte reached Moscow--only to find it empty (nothing to pillage; nothing to eat)--the worst part was the retreat. Imagine the heartbreaking scene on the banks of the River Berezina. Fifty thousand men waded into into an insignificant (but freezing) river in Poland; twenty eight thousand made it to the opposite bank. Where another eight thousand were killed by the Cossacks. Thousands of camp-followers presumably died as well, but nobody kept track of inconsequential collateral losses of the "comfort women" of Nap's officers' Corps.

"Probably the best statistical graphic ever drawn, this map by Charles Joseph Minard portrays the losses suffered by Napoleon's army in the Russian campaign of 1812. Beginning at the Polish-Russian border, the thick band shows the size of the army at each position. The path of Napoleon's retreat from Moscow in the bitterly cold winter is depicted by the dark lower band, which is tied to temperature and time scales".
Edward Tufte.

Posted by Jim Bouman at 9:41 AM No comments:

Compact compromise. Hold the rejoicing over this "victory'.

I'd call it a diversionary tactic.

I fully expect the compromise to convey about the Waukesha Water Utility the impression that they are in support of all the provisions of the Compact.

1. They will immediately press the issue with DNR, (watchers of this agency should be warned that DNR is not above secret conniving with development interests around the subject of water resources).

2. They will attempt to get a diversion approved under existing WRDA standards. Part of their argument will be that they stand foursquare behind the Compact--especially because they will not have to meet the standards, since the Compact is still "in-process".

The return flow and conservation elements of the Compact clearly worry the commissioners (and they should scare the daylights our of the rate-payers). But, this current "progress" on the Compact--what the late, great Ed Jackamonis used to call "dynamics-without-change"-- will serve to divert (that word again) attention from the real consequences, as everyone gets excited and congratulatory about this "victory".

If Waukesha gets access to Lake Michigan water, the existing rate-payers and tax-payers will bear the full and enormous cost of the infrastructure to get the water out here. We should assume the Utility will not plan for return flow; they'll assume they can finagle a way of putting partially treated sewage into the Rock and Fox rivers--a little bit back to the lake and a whole lot out of the basin forever.

They are aiming to divert 22 million gallons per day (mgd) from the lake. That is a lot more than the current 8mgd that Waukesha uses. That much additional water will eventually require upgrading and expansion of the Waukesha sewage treatment plant.

And, what if those subdivisions don't materialize? What if we have a long and painful economic downturn/depression? What if the increase in tax base doesn't cover all of the costs?

Tough luck. It will merely be a minor miscalculation by developers and land speculators... and a huge on-going cost for the rate-payer/tax-payer.

This compromise is already beginning to stink.
Posted by Jim Bouman at 4:39 PM 1 comment: