Congress prepares a batch of sausage....

For example: Any letters I received pre-1964, (perhaps containing a decoder ring or a birthday card from my godmother with a buck in it--quite a generous gift, that buck would buy four packs of Pall Malls or 20 Nestle's Crunch bars) would have been addressed like this:

Our mailman (back then, all letter carriers were men, so there was nothing else to call them) and about thirty others--all of them working out of the branch PO for Zone 2--couldn't start sorting the mail for their routes until other sorters, located in the branch and working the graveyard shift, sorted them down to the thirty-some piles for the individual routes The only tool available was that two-digit ZONE number. The entire City of Cleveland could have no more than 99 zones. Once the ninety nine piles were sorted by zone number, everything else depended on knowing which street and which block was in which route.

The U.S. Post Office in Washington had bright staff who researched all the possible methods of getting a zone-coding system with greater finesse at locating a building, on a street, in a neighborhood, in a zone in a city in a state, all by looking only at the Postal Code Zone.

They looked and looked. They noted what the Brits had, looked at what the Canadians were considering, and checked out what Cuba had. Cuba did not make the cut, as it had a system that delivered letters addressed like this: "...near the corner of Avenida Zanha and Calle Rayo".

The Post Office recommendation in '63, made by the esteemed Postmaster General, John A. Gronouski--a good Kennedy Democrat from Wisconsin--called for a six-digit indicator, using twin alpha-numeric sets of three, with alternating numbers and letters (A2B 3C4) that would produce a huge range of combinations, allowing an indicia sufficiently versatile that it could sort mail into some very fine categories.

For Example, A piece of mail coded A3X 7P4 could have enough precision to indicate the address was:

It was being used-- after having been perfected--in at least two places: Great Britain and the Netherlands. And everybody LIKED IT A LOT. And many other countries were studying it.

The American People will not tolerate, will not accept, will not use six digits, especially with those confusing letters of the alphabet mixed in. The American people will accept only a system of zone codes with no more than five numbers... and no alphabet soup.

These are the same fools who are designing a health care system, getting right down to the minutia, for the American people. They're doing it in committees and caucuses and eye-gouging, log-rolling, horse-trading confabs from now until the last lobbyist has been shook down.

After twenty years of Mr. ZIP (a backronym for Zone Improvement Program) the US Postal Service tweaked the marginally useful ZIPcodes with ZIP plus 4. Congress no longer has any say in postal affairs, as it is now (since 1972) an Independent Agency of the U.S. Government, not funded by taxes, not run by Congress.

But is still saddled with what the US Congress did in creating the Zone Improvement Program.
Posted by Jim Bouman at 7:06 PM No comments:

Then and now in beisbol....

In Game 3 of the 1997 American League Championship Series, Baltimore pitcher Mike Mussina struck out 15 Cleveland Indians in seven innings. Indians pitcher Orel Hershiser had seven strikeouts in seven innings. The game started at 4:17 p.m. in Cleveland, and 13 of the first 18 outs were strikeouts.

Further back: the the darkest* moment in Cleveland's benighted baseball history was the '54 World Series. But it had nothing to do with shadows creeping across the playing field. The Tribe having won 111 games on the way to the pennant, were swept by the Giants in a 4-game series, played on 4 consecutive days, in bright sunlight without shadows.

The 1954 World Series began in the early afternoonon of September 29 at the Polo Grounds. Marv Grissom threw the first pitch, hitting Al Smith, with Doby on deck, Avila in the hole and Rosen ready to clean up. Nothing worked for the Tribe that afternoon. And Willie Mays iced the win by making the play of the decade in center. One hundred two (102) hours later, it (the entire World Series) was over, at the end of game four at Lakefront Stadium in Cleveland.

So intent on moving the season to its conclusion, the Commissioner of Baseball didn't even allow a day off for travel. I couldn't find evidence of whether the trip to game three in Cleveland was by air or rail travel; the 20th Century Limited would have been an easy choice.

Baseball in the age of TV has been bent to the desires of revenue-hungry advocates of spectacle, not to mention the endless parade of advertising, necessitating strings of official time-outs.

And since most of the games are played on week-nights, we get scenes of the Boys of Summer shivering their way through games played on the cusp of winter. I liked it better the way they did it in '54...mostly. I refuse--still--to forgive Al Lopez for not going to Rapid Robert in the 4th game.

*In truth, the death by beanball of Ray Chapman, at the plate in the Polo Grounds against the Yankees, was the worst day--Aug. 16, 1920. But, to an 11 year old fan, who hadn't yet read enough baseball history, there was no comparison.
Posted by Jim Bouman at 12:25 PM No comments:

Herb Kohl: a guy who'll offer you a glass of water on a cold day

I wrote Herb Kohl a cordial and encouraging letter about why I thought he should join the growing numbers of Senators and Representatives backing bills to lift the Cuba travel ban for all Americans. I referenced Senate Bill 428, which already has 32 Senate co-sponsors.

"I understand your concerns about possible changes to U.S.-Cuba relations included in the recent Omnibus Appropriations Act of 2009. Section 620 of the Omnibus Appropriations Act amended the Trade Sanctions Reform and Export Enhancement Act of 2000. This amendment would authorize changes for travel relating to commercial sales of agricultural and medical goods. However, the Obama administration has stated that they will disregard the amendment pending a further review of the embargo against Cuba.

"I assure you that there have been no significant changes to U.S. foreign policy related to Cuba. In the future, any changes in our relationship with Cuba will be made by the Obama administration with consultation from the U.S. Senate.

"Please know that I will keep your thoughts in mind should the topic be debated during the 111th Congress."

This response is an insult.

Your first sentence includes: "...the U.S. has imposed a travel and economic embargo on Cuba since 1958 in response to Cuban President Fidel Castro's refusal to democratize and demonstrate greater appreciation for human rights". Ignorant.

Why would you send me this kind of half-baked nonsense? In 1958, Fulgencio Batista was the thug "leader" of Cuba; he didn't give a damn about democratizing. He was a murderous, thieving pal of gangsters and of the American government. The travel ban and embargo were imposed years later, along with a four-decades-long program of CIA interference in Cuban affairs, including many attempts to assassinate Cuban leaders.

I asked you about your view of sponsorship of Senate Bill 428. You wrote back about Section 620 of the Omnibus Appropriations Bill. Unresponsive. Head fakes work under the basket, not in Congress.

We send you to Congress to work. We expect you to hire competent people who are able to read a letter and respond with something other than this uninformed, non-responsive "bedbug" letter. I've received letters like this one over your signature in the past: Vaguely in the same neighborhood of the subject, but non-committal, something for everyone.

Will you please have your staff return to my original letter, read it carefully and get me a responsive reply.

This whole business of sending form letters in response to real questions is--as I said--an insult to those of us who are up-to-date on the issues and ask pointed, well-informed questions. 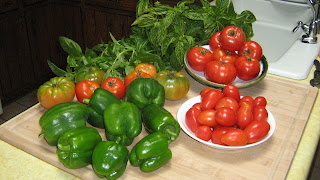 Not the best year for garden produce--lack of heat in June and July gave us tomatoes that look fabulous and taste only so-so (but, still, infinitely more desirable than hothouse and other winter grocery store produce). The plates of beefsteak and plum tomatoes are far outdone by the still-ripening heirloom varieties. The peppers shown are now stuffed and headed for the oven. I harvested half the basil and made two quarts of pesto. What's shown in today's photo is maybe a third of the season's production.

All the beets are long-gone--down the hatch. Thyme is still flourishing, as is parsley. But the big, still-to-come treat is our three dozen leeks. They'll stay put until well into November. Getting kissed by frost makes them even better.

All that from forty sq. ft. of raised beds.

A good year. Glad I didn't take the bait and plant corn so I could make a killing selling it to the ethanol distillers.

One interesting surprise: I planted my quick-and-dirty, dirt/cheap version (a 5-gallon bucket with a hole cut in the bottom) of the "Topsy Turvy" upside-down tomato growing apparatus. They were tiny, a grape variety. Never got to bring even one of them into the house... because I ate every delicious one from that prolific producer right off the vine.