WaterBlogged to MJS: Thanks, but no thanks.

A week ago, while shopping at Farm & Fleet in Waukesha (if they started selling meat and potatoes, fruit and vegetables I would consider that outfit a candidate for becoming the ONLY store I ever enter) I encountered a bright young fellow who worked hard to persuade me that becoming a paid subscriber to the Milwaukee Journal Sentinel made sense. Our household pays $46.00/Mo. for The New York Times and appreciates the quality of the paper and the excellent home delivery, courtesy of an independent contractor who is virtually indentured to the Journal Sentinel, but gets to deliver other stuff, too.

But the young fellow persuaded me that the "paid subscriber" thing works to my advantage, as he was about to give me a $10 gift card usable at Farm & Fleet. The paper that comes from Milwaukee was proposing to pay me to be a subscriber. All I had to do was agree to a monthly credit card debit of $7 to cover daily and Sunday home delivery, for three months, to be offset by the upfront equivalent of a $10 credit I was getting. Moreover, I had the right to cancel at any time during the term. Looked like a fair-to-middlin' deal, though I could almost hear my dad saying "It isn't a bargain if you don't really need it".

Ooooh, hard to imagine that $11 out of my pocket is enough to cover the costs of producing and delivering 78 daily papers and 13 Sundays of product that would cost $58.50 retail (not delivered).

This morning the new newspaper arrived in a plastic bag, right next to the The Times, right in front of my door. The legendary New York paper weighed about half what came from Milwaukee. I opened both of them, began grazing. 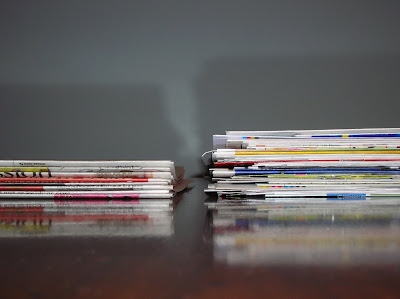 Journalistic effort on the left. Commercial sludge on the right.

Journal Sentinel included about two pitchforkfuls of coated-stock, four color, perfumed, mostly tacky commercial stuffers. Divided into two stacks, the content--everything printed on newsprint, including classified, auto and real estate--was a lighter and shorter one than the sludge.

Next, I went to the Crossroads, to sample the best of Milwaukee ideas and opinion. The section has clearly become amateur hour. Least satisfying were three "Quick Hits...mini opinions...from the Journal Sentinel Editorial Board's Reader Advisory Committee, whose members are chosen annually".

All three failed to communicate much. One of the writers ranted about how

"President Bush quietly accepts his adversaries waging a campaign of verbal assaults against him, which is bound to result in low approval ratings from the American people. Some Americans are distressed by this administration that endures abuse by Democrats just to “get along.” Americans don’t want to “get along” with people who are wrong.

I'd want to know more about this adviser's advice to the editorial board, but, then, I could get that from listening to the Sykes and Belling shows.

A second, by a retired UWM professor, reveals that TIF Districts are subject to abuse and need to be watched. This is pretty worked-over stuff, common knowledge even among the middle school set, something that isn't going to change based on one tired prof's recommendation.

Finally, Mai Xiong, a third "quick hit" adviser, goes deep into the interplay of Hmong-Americans, a heroic (or cruel and murderous, depending on one's point of view or tribal affiliation) military General Officer, the Laotian government, a war that started three or four generations back, and the U.S. government. There's plenty of evidence in six sentences that there is some deep hatred and unhealthy licking of wounds underlying this opinion. But, there's no context, no background, no way of evaluating the statements. Hit 'n' run.

I called and canceled. They will properly charge me the $5 bucks the Farm & Fleet card is worth.

Thanks, Pop, I'll try to stay tuned to your sterling advice: "It's no bargain, if you don't have any use for it".
Posted by Jim Bouman at 10:44 AM

You know, if you buy a Waukesha Freeman on Thursdays to read my column it will only cost you $.50 at the gas station.

But buying and reading the Freeman always gets me to recalling Voltaire writing in response to Marat:

"I am sitting in the smallest room of my house with your letter before me. Soon it will be behind me."