What's with that thing behind his head?

As I was reading the Rick Esenberg blog, struggling to keep the blogger from taking possession of my brain and forging the mushy lump into a leg-hold trap, my attention kept getting drawn to the portrait of himself he has provided.

The guy has a halo.

Look at it. That's a genuine, unambiguous, beatific, perfectly-formed, other-worldly, stairway-to-heaven halo. The quintessence of what Mark Twain observed and named: "...the calm confidence of a christian with four Aces".

Which sent me off on a web chase to learn a bit about halos. They seem to have gone out of style in post Vatican II catholicism. I don't believe they were ever such a big thing with those who took a different tack after the Reformation.

They do seem to have cracked the world of comic book culture. Spidey--since that bite from a magical/mischievous arachnid--gets a case of the tingles and a halo every time he senses danger. 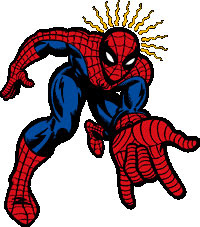 And Che, who displaced FDR as the most visible secular saint of the 20th Century, (and still cookin' in the 21st) has a halo treatment nearly identical to Rick's.
As Aretha put it: "Who's Zoomin' Who?" here. 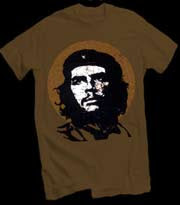 To get to the real source of halo knowledge, we need to get back further even than the most persistently aggravating advertising jingle of the 1950s: Halo everybody, Halo. Halo is the shampoo that glorifies you hair. So, Halo, everybody, Halo.

We have to trudge all the way back to St. Denis, first Bishop of Paris, who was beheaded around the year 250 CE. As anyone can plainly see, Denis is the quintessence of a christian holding four big one-spots (with a bug-eyed joker up each sleeve) and a heaven-sent exemption from the need for dry cleaning.

Denis has two halos. One for his noggin--which someone just handed him--and another for the stump from which it was so recently and cleanly cloven. 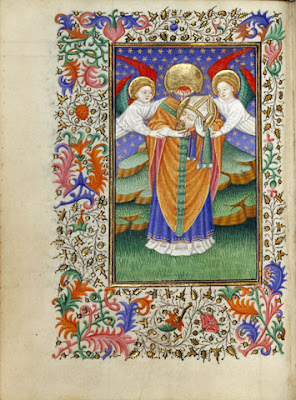 This is a bit of a departure from my usual blog preoccupations-- 1. Waukesha's Water Problems, 2. Sprawl 3. Yin and Yang.

What it actually has been is a two day learn-by-doing exercise in how to marry graphics and text in Blogger.

I think I got it down. But at what price?  "Knowledge maketh a bloody entrance".

Does anyone out there have the actual provenance of this most quotable of Shakespearean-quotes-not-by -Shakespeare?

Please, somebody out there, tutor me in linking? In the best of all possible blogworlds, I'd have been able to make the words "Rick Esenberg's blog" in the first sentence show up bright blue, so you could link to that blog and make sense of the reference to mush-for-brains and spring steel, also in the lead paragraph.

I'm in need of a good reference to how to do linkin' in Blogger. Can't understand the directions that came with the package. I'm told there is a "... for Dummies" book out there. But I refuse to descend to the level of self-abasement involved in buying anything from that series.
Posted by Jim Bouman at 11:49 AM

If you had a halo, you'd know how to link. But since you don't, you might try copying the address to which you wish to link, highlighting the text that you wish to tag and then clicking on the little thing that looks like a chain link. Up will come a window into which you can paste your copied address and, voila! (note spelling), you will be webbed up for real.

As for the picture, it took a Journal-Sentinel professional to do that. Don't try it at home.

That was the funniest damn thing I've read all day.

If you still need linkage advice, it works like this:

Welcome to [a href="http://waterbloggedinwaukesha.blogspot.com/"]Water Blogged In Waukesha[/a], maintained by a pretty funny guy.

Now if you substitute the triangular brackets, < and >, for those square ones, it comes out like this:

Welcome to Water Blogged In Waukesha, maintained by a pretty funny guy.