President Obama promised us he was: "Gonna Lay down those shufflin' shoes..."

On Nov. 3, 2007, Barack Obama -- as a candidate for president--promised a crowd in Spartanburg, S.C., that he would watch out for unions and protect their collective bargaining rights.

"If American workers are being denied their right to organize when I'm in the White House, I will put on a comfortable pair of shoes and I will walk on that picket line with you as president of the United States,”

Time to take off those golf shoes, Mr. President.  No more pussyfooting.

You're expected in Madison next weekend. 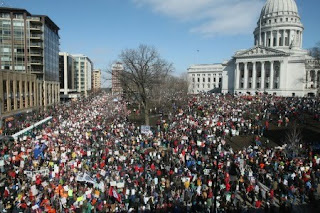 A promise is a promise.
Posted by Jim Bouman at 6:47 PM

I like that that you say {as|like} my friend thanks