Kevin Drum, at Political Animal, has a beguiling way of pulling it all together in a few pithy sentences:

Turkey has warned us that if Congress passes a resolution calling the 1915 Armenian genocide a genocide, "military ties with the U.S. will never be the same again." Russia and the other states surrounding the Caspian Sea are cozying up to Iran and warning us not to even think about launching an attack against Iran's nuclear facilities. China is "furious" because President Bush is meeting with the Dalai Lama. India is having "certain difficulties" approving its nuclear deal with the U.S. Britain is pulling out of Iraq. The Iraqis are pissed off at us over Blackwater. Afghan leaders are angry over our poppy spraying program, and Pakistan continues to provide a safe haven for the Taliban.

Other than that, though, how are things going for us?

Because he occasionally stumbles over mere words and gets tripped up on syntactical minutia, George W. Bush reaches into his magician's silk hat and pull out a one-eared wascally wabbit--his version of high speed communication in the digital age. 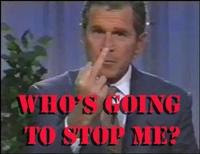