Back from Journey. A 4,000 mile driving trip with the Cuba Caravan

It all started last year.

I did what I'd been planning for almost five decades--went to Cuba. I traveled with Pastors for Peace.

Pastors for Peace is a project of the Interreligious Foundation for Community Organization, based in NYC (Harlem, actually), led by former Milwaukeean, the Rev. Lucius Walker. Lucius Walker founded Northcott Neighborhood House in the late 50s, got an MSW (Master of Social Work) at UWM in 1963, was a principal of the Triple O, a famously talented group that multiplied the effectiveness of many grass roots Civil Rights organizations by being the Organization of Organizations in Milwaukee during the 60s. And he did all this while serving a Baptist congregation and raising a young family in the city of Milwaukee.

Rev. Walker, at 75, is the liveliest, hardest-working, most focussed articulate and charismatic Community Organizer I ever hope to meet (and, hey, I once met Saul Alinsky). This year he is making his 67th trip to Cuba (18th with the Caravan, the rest with various groups and individually). Few Americans--and none in government--are as well prepared, connected and equipped to be the next Ambassador to Cuba, (once we get our relations with that nation under control, that is, out of the control of the American right wing) though one suspects that he would decline such an offer and continue to follow his pastoral calling.

Last year it was eleven days of peripatetic fund-raising through the midwest, followed by a conscious and public (right in the face of ICE, OFAC, Treasury, State and Homeland Security), dignified and respectful act of civil disobedience in going to Cuba with a hundred tons of humanitarian aid in the delightful company of a hundred fellow Americans, Danes, Scots, Brits, Germans, Mexicans and Canadians. We crossed the border at McAllen, Texas/Reynosa, Mexico, then left for Havana from Tampico International. 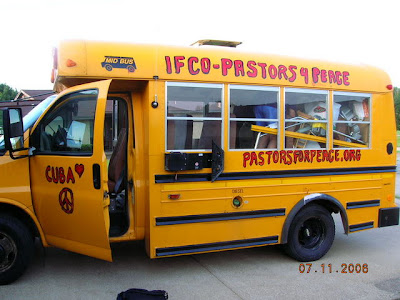 Here's a typical Caravan vehicle--a bus, loaded with medical supplies and equipment, carrying six caravanistas from Ontario, Pittsburgh and Bloomington IN--which will be driven to the port of Tampico, Mexico, loaded on a freighter by the volunteers from the Mexican Longshoremen's Union, bus and all, and shipped to Cuba. 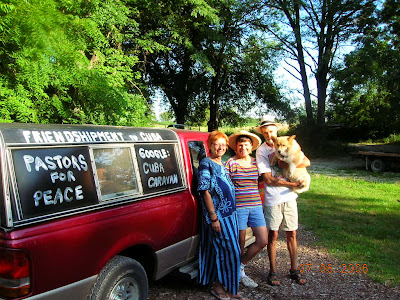 Waterblogger's 13 year old pickup truck, my fellow-traveling caravanista from Germany, and our Iowa hosts on a stop at an Ames Iowa Organic farm. 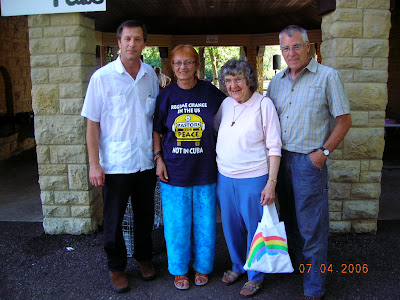 The people of Rochester Minnesota, hosted the Caravan with a picnic potluck. Here, from the left: A Minnesota farmer who sells cattle and sheep in pairs to add genetic vigor and higher milk and meat production to the herds of several Cuban Farm Co-operatives; Sabine Caspar, a Caravanista from Hamburg Germany, making her tenth trip with Pastors for Peace; an amazing nun, who worked for years in Central America... and one of the drivers . 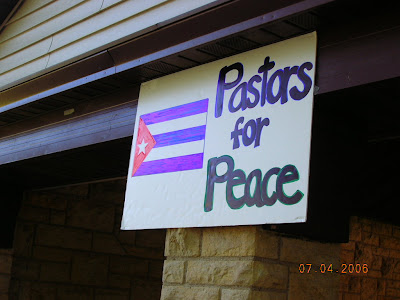 Home beckoned --the blogger had only two weeks to devote to the Caravan this year--after thirteen days on the road, so Waterblogged headed back from Texas as the rest headed to Cuba.

Next year in Havana.
Posted by Jim Bouman at 3:40 PM