Last month an issue--the building of a new Waukesha water tower in the area surrounding the UWW campus--boiled into a short-lived, but intense, controversy.

There are two subdivisions in the University area on the northwest side of Waukesha: one abuts the eastern edge of campus, the other hugs the western edge. Westowne (to the east) comprises about four hundred fifty lots (small, with typical dimensions of 50 ft X 125 ft, just east of the campus. It's a working class neighborhood, has been there since 1924. [full disclosure: I live in Westowne, have for 16 years; and I love it.] Not so long ago it was out-in-the-country, beyond the western boundary of the City of Waukesha. Now it is viewed as inner-city.

In another world entirely is the Siepmann-developed Tallgrass experience. It was platted and offered for sale in 1995--and almost immediately built-out--following a pattern that had been quite successful, both economically and esthetically, for Siepmann in the 70s when the nearby Pebble Valley was developed. Siepmann's idea has been to place residences on relatively small parcels, but provide an extensive meandering greensward of unifying common space.

Tallgrass, by comparison, has seemed like too much of a good thing. The houses are gigantic, averaging almost double the size of those in Pebble Valley. Tallgrass is out-of-scale. The tract mansions seem crowded; trees will take many decades to grow to a size proportionate with the dwellings. Pebble Valley, in contrast, has matured nicely. Its neighborhoods are appealing and much desired by conservative homebuyers.

Because of all the burgeoning subdivisions--Tallgrass for one--being annexed to the City, water pressure in the northwest pressure zone has been deemed insufficient. There has been, since 1991, on the boundary between UWW and Tallgrass (and the cornfield that preceded Tallgrass), a 65 ft standpipe (a type of comparatively short, squat water tower that resembles a silo rather than a mushroom). It was there, on high ground, looming over several properties in Tallgrass from the beginning. Most in Tallgrass couldn't see the standpipe; those lots that were close were said to have sold last and at a discount.

But the replacement tower is to be huge, over a hundred feet tall, with the bulk of the water storage in the upper half of a more typical balloon-on-a-stick water tower. It is going to be visible from most of the houses in Tallgrass.

The Tallgrassers (at least some of them) weren't happy. They pouted. They did a lot of homework and came forward with a lengthy and detailed jeremiad backed up by sixteen pages of topographical, geological, aerial photographical, economical, taxical and obtusely analytical argumentation. It was all very reminiscent of the famous Officer Obie report: "...twenty seven color, glossy photographs, with circles and arrows and a paragraph on the back of each one," the backbone of his airtight case against Arlo and the gang from Alice's Restaurant.

Their demand: Move that water tower over to the edge of that working class subdivision.

And why? We pay more taxes than they do.

Here's the page from their proposal with the rationale. 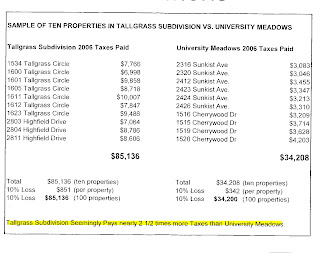 (reader: kindly forgive the inability of this blogger to get an inserted page up to readable size. The highlighted line is: "Tallgrass Subdivision Seemingly Pays nearly 2 1/2 times more taxes than University Meadows"

It is a corrosive and particularly ugly assertion.

We have by virtue of the size and location and valuation of our residences an a priori entitlement to extra consideration, preferential treatment, extraordinary deference.

Where do these people get such distorted notions?

Alderman James Connors, October, 2005: "A lot of my constituents have assessments of over $360 thousand and they don't think they are getting their money's worth."

Connors, again, in October 2006: "My constituents are paying more than their fair share."

Alderman Rick Tortomasi, December 19, 2006, in a Waukesha Freeman guest opinion: "The west side is expanding even further west with the addition of of hundreds of new homes well above the Medium [sic] -priced home in this city. That means they are taxed higher than the average city taxpayer."

This attitude and belief is corroding a fundamental understanding.

The owner of each home in Waukesha pays at exactly the same rate of taxation.

Eighteen and seven hundred seventy seven thousand, eight hundred sixty seven millionths of a dollar/per thousand dollars of assessed valuation. $18.77 per thousand, for short. (Honest, look at a tax bill. The tax rate is precisely computed to six decimal places). Each of us has his or her own multiplier--the value of our property. Anyone who doesn't like the size of the multiplier is in complete control of that variable.

If you cannot afford the taxes, you've got too much house. Don't moan about how some--at the high end--are taxed higher than the rest, or that they are paying more than a fair share. And, if you're a politician, don't encourage that kind of thinking.

Note : My wife, my children, and I know a number families and individuals who live in Tallgrass. Wonderful, decent, modest, generous people. It is clear that not every one of the residents of that nearby neighborhood stood behind (or even knew about) the statements made by the vocal group. Doubly a shame, because they may get tarred with the same brush. But not by me--A special thank you to those Tallgrass residents who apologized for the ugliness of the whiners.