The Wall of Pain

"The crimes in Chinatown include incest and murder, but the biggest crime is against the city's own future, by men who see that to control the water is to control the wealth." Roger Ebert, 1974

This blog may have a title that focuses on water, but, as in the 1974 Oscar-winning film (Eleven nominations, just one statue, in the year of Godfather II) starring Jack Nicholson, Faye Dunaway and John Huston, the thing that underlies all of the action is people who buy land cheap by manipulating water, and sell it dear after they've induced the taxpayers/government to assure an endless water supply.

Waukesha's no Chinatown, but it has a cast of analogous characters: Wm. Huelsman, Bryce Styza, The Bielinski brothers, and a host of smaller fry. I'm not even remotely suggesting these big players do anything untoward. In fact, they are deemed locally to be the leading edge, the engine of growth, the facilitators of much-needed tax revenue. I'm merely noting the way they operate, the way they spin fantasies of upscale, exclusive (exclusive: Is this a word with a few ugly overtones?) residential communities that induce people to move to a contorted version of the good life in ever-more-remote subdivisions.

Places of anomie and alienation where parenting is synonymous with chauffeuring, where kids never go to the park, because mom and dad have a park-like lot. Places where you'd like to be friends with your neighbors, but you know they'll talk behind your back if you have dandelions. Places ever more dependent on the availability of cheap petroleum, ever more likely to foreclose what's left of the agriculture--the culture part--and the farmland we are going to need in the future.

There's always been a lot of money to be made, but developing hasn't always been easy for developers.
When I first came to Milwaukee in 1966, the air was full of shock and gossip and derisive commentary about the spectacular fall from the pinnacle of hubris by Francis Jay Schroedel and his doomed Rainbow Springs development out near Eagle. In the late fifties, early sixties, when he was cooking it up, SE Wisconsin was still in the planning and early construction phase of I-94 to Madison. The farmers way out there still had fairly prosperous dairy operations; they wondered what was going on in this developer's head. And there were few, if any, commuters.

Schroedel got himself pretty far out on a very fragile limb. Mercifully, Schroedel's name is still attached to his successes; few know that the post-war wunderkind of the cradles of the baby boom was the same guy whose big dream is still a nightmare fifty years later.

The highs and crashing lows of Waukesha development surfaced again in 1976 in the person of Bob Nanz, the hotshot of his decade, backed by a couple of bank insiders. There was a clear appearance of winking at a yearlong check kiting scheme by Nanz as he tried to paper over the hemorrhage of cash from his developments with a blizzard of bad checks, kited from one empty account to another. One of the insiders was declared non compos mentis by a compliant judge (saving him from possible indictment), but Nanz went to jail.

But, why indulge in this review of long-forgotten Waukesha developer nightmares?

Because it is coming back. It is not hard to imagine today's mega-developers sleeping less than soundly, waking in cold sweat and tremors from dreams that borrow images of Scrooge waking up to Marley's ghost, warning "Don't get over-extended. Beware the bankers who'll toast your Midas touch with single malt scotch tonight and foreclose in the morning".


So, what leads this blogger to predict the return of gloom and doom? 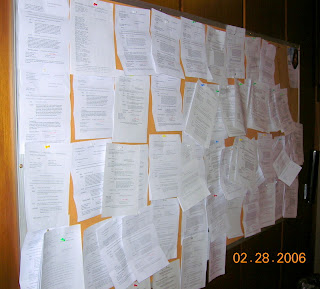 It's Waukesha's Wall of Pain.
This is a bulletin board in the main lobby of City Hall. Over the years, I've seen as many as five or six public notices there at any given time. Yesterday, I saw 72 of them. Sheriff's auctions to be held on the Courthouse steps. Foreclosed houses all over Waukesha County.

And underneath the legal lingo, the anguish of people who are losing their homes is palpable. None of the notices I read was for a debt of less than $100 thousand. A surprising number were for mortgages-in-default in the range of $370 to $490 thousand. One of them was for a house in my neighborhood. I checked the details on the Assessor's web site when I got home. A couple bought the house for about $168 thousand at the end of 2004. Next month their place will go to the highest bidder. Their present indebtedness on the mortgage: $183 thousand.

For every person, couple, family that is subjected to this, there are probably twenty (or fifty, who knows?) who are on the brink, and hundreds (or thousands, who knows?) living from paycheck to paycheck, knowing a layoff means bankruptcy and forclosure.

Too much house. Too much offered. Too much inflation in the appraisal. Too far from work. Too much mortgaged. Too much fantasized equity taken out and spent through home equity borrowing.

A prediction:
Aurora will not build a Pabst Farms Hospital in Oconomowoc. Comes time to float bonds, the implosion of confidence in growth scenarios and looming chaos in real estate financial markets will send the plans up in smoke. Good thing: the best thing that could happen to Pabst Farms is that it goes back to being farms.
Posted by Jim Bouman at 7:53 PM