We learned that the $20+ million upgrade to the I-94 Hwy P interchange is ready to begin--contracts let, and ready to go.   Also, that  Pabst Farms housing development has returned the huge swathes of land intended to be for the more pricey (phase II) and insanely pricey (Phase III) enclaves of the Pabst Farms Experience back into plain old farm land.  This lets them pay less real estate taxes on what formerly was  designated as residential land.

Good news it is--the part about the re-classified land.  But...  The DOT's I-94 and Sawyer Road  interchange foolishness is NOT yet planned, NOT under contract and NOT about-to-happen as the commenter mistakenly stated yesterday. (hey, it's hard to keep up with this moving target).

But it is in the plans, bigger than ever, just shoved off until later.  That's ok; that's good news.  Means we still have opportunities to comment , criticize and harpoon the DOT plan to waste money trying to prop up Pabst Farms and Aurora Summit.
.
Here's what is in the actual 2011 plan:
1.  Resurfacing  I-94 for one half mile east and one half mile west of  Hwy P (Sawyer Rd.) at a cost of $1.3 million is to happen in 2011.  Project # 406 in the SEWRPC Preliminary Transportation Improvement Plan, 2011-2012.

And, here's the elephant in the living room:

The nearly $9 million that was spent two years ago acquiring land and doing initial clearing, grubbing and crossovers, now has added to it $1.3 million in resurfacing I 94 around the interchange.

They have spent/committed a total of about $12 million on this boondoggle in support of the dying-mostly-dead development at Pabst Farms, Aurora Summit Hospital and a laughable Regional Shopping "Destination".

Sensible people need to get together a coordinated plan to get Scotty fired up about saving money / balancing the budget by dumping this ill-conceived and wasteful highway boondoggle, daring him to keep funding this clown act while the State of Wisconsin is mired in deficits.
Posted by Jim Bouman at 10:32 PM 1 comment:

For lots of young adults a couple years out of school the big question to somebody they like a lot: " How much school debt are you carrying?" 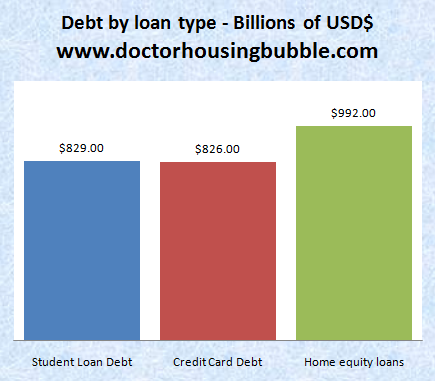 The housing crisis is not going to resolve itself.  Not next year, not under the next President, not even when housing prices sink to the level where they are in rough sync with incomes...for those who have incomes.

Because a couple of generations of college grads-with-debt-up-the-wazoo and years--nay, decades--of underemployment under their belts will have saved nothing, zero, zilch to use as a down-payment on a nice little monstrosity of a tract mansion at the far reaches of suburbia.

More than twenty five percent of  college graduates in Califormia are deemed to be underemployed, working at jobs that do not validate the fast-disappearing notion that higher education is the ticket to middle class income and prospects.  The trend in most other states is likely headed toward Calfornia's numbers.

In this chart--from the amazing and prescient Dr. Housing Bubble--we see that aggregate U.S. credit card debt, which used to be just shy of a trillion, is shrinking, shrunk to less than the aggregate total of school debt.  Lots of bankruptcies have resulted in banks writing off huge amounts of the card debt.  But the school loans go on forever; there's no escape; the interest keeps mounting, no forgiveness even in bankruptcy.  Legions of alumni will take huge balances on their owings, along with those memories of school days, to the grave.

Not everybody will will be in this pickle.  But, if only 20 percent of those who would have in the past started shortly after graduation on buying starter houses, then moving up the domicile ladder are mired in education loans, they'll drag down, demolish, drown the whole market.

Just at the moment when huge numbers of baby boomers are unloading their big suburban--and even their modest-but-still-very-nice*--abodes, there will be a whole lot of people with high hopes and no-chance.  Tough lending standards and 20% downpayments are going to be beyond the reach of a significant number.  And this will kill the real estate market by driving prices down, down, down.

Suburban dreams are fading fast already.  Many of the young and young-ish who are presently minimally set to buy real estate are leery of diving into the suburban lifestyle.  Four hours every weekend of riding a mower, long commutes on deteriorating (asphalt is, after all, just another word for petroleum) roads.  While their fathers were practicing lawn-adoration, they were inside tuning in and turning on to the prospect of living where Friends and Seinfeld lived--urban apartments.

* Even Casa Waterblogged will be for sale when the crocuses reappear, as the residents plan a move back to Milwaukee
Posted by Jim Bouman at 10:18 PM 1 comment:

For those who think that electric (renewable energy powered) cars will replace petroleum-powered ones check this graph... 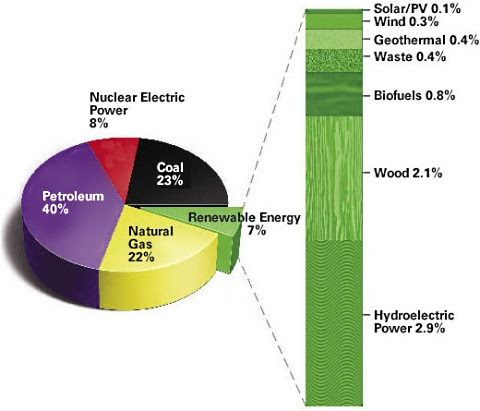 In the US, only 7% of energy comes from renewable sources.  And 70% of that 7% comes from burning wood and damming rivers and streams.
Posted by Jim Bouman at 9:51 AM 1 comment: